Lemuria is a Multi dimensional reality that I have a strong affinity and where much of my Aty is inspired by, but what is Lemuria ….

Welcome to the realm of Lemuria, a magical place infused with an abundance of life-force energy, fertile lands, lush rainforests, crystalline waterfalls and beings who so gracefully dance with the tides of nature and the ebb and flow of life. There is no scarcity as all that is required can be created at will. In essence, Lemuria is an elevated state of being … a dreaming that sees beyond the dream. 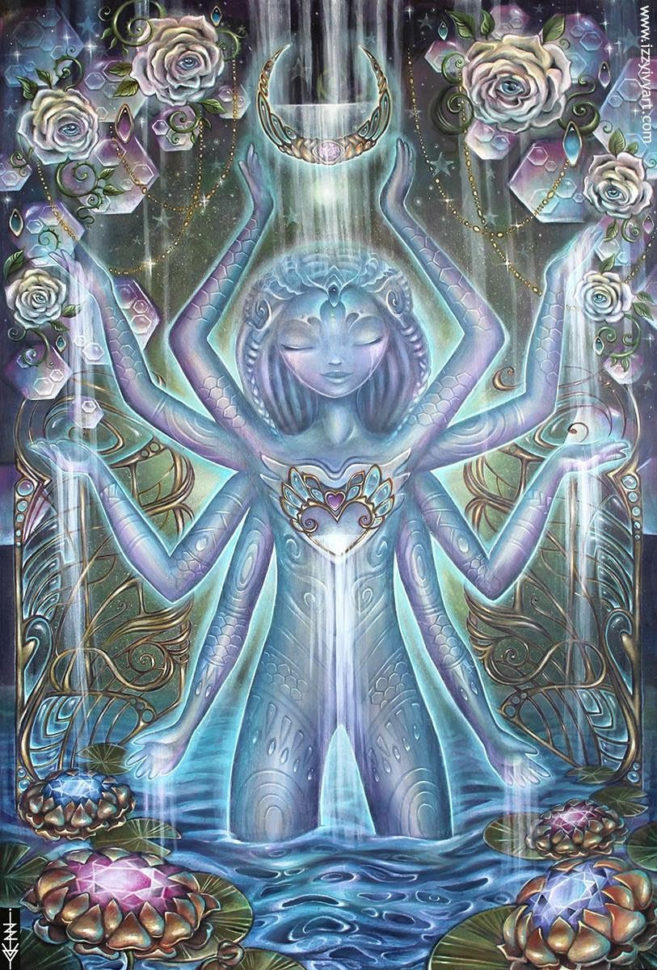 Lemuria is the knowing of universe and all her stars,

The all came before and ever will be.

The iridescent shimmer of remembering what we came here to do,

The awakening beyond the veil of the mundane,

The journey back to wholeness

In honour of every part of who we are.

This is the unfurling, back to our hearts,

The interconnectedness of existence.

Many of us are familiar with Atlantis, a lost civilisation that disappeared into the Atlantic Ocean many thousands of years ago. Atlantis was home to a highly evolved race of beings whose technology was centred around the power of crystals. They harnessed natural energy in a way is currently unfathomable to us.

Also known as Mu, Lemuria was another civilisation that existed on the planet at the same time or just before Atlantis. Located in the Pacific Ocean, its residents were of a gentler, more earth-based nature. They also worked with the crystalline forces of minerals, and the planets. They sought to be in harmony with life rather than the hierarchical power that would push evolution to the threshold and eventually bring extinction across the planet.

Lemuria and Atlantis may have resided in physical reality. There are also accounts that imply these civilisations exist or existed in a multidimensional overlay to the reality we are more familiar with. Whatever you believe, their lessons, stories and understanding of the universe and the future of humanity is accessible to us. When we work with the energies of their blueprints, as mythical stories, archetypes or as a reality that is even more true than the physical, as our indigenous kin may inspire us to see, we can find our way to their wisdom.

You may be familiar with Lemurian Quartz crystals, or seed crystals as they are also known as they are found buried in the ground. These crystals are indented with lines — ridges and furrows — and it is said they hold Lemurian wisdom that will one day be significant to a future civilisation.

There seems to be an influx of Lemurian incarnates on Earth right now. Another view is that the archetypal message these beings carry is showing up in increasing prevalence. There is a remembering and a realisation that the keys for a sustainable future are in the ancient roots of our ancestors and the lost civilisations that came before. The Lemurian archetype has been portrayed in Hollywood films such as Avatar and more recently, Valerian. This shows how the Lemurian imagery and information is droppleting throughout our culture at this time.

Right now, we are facing a parallel story of Lemuria and Atlantis. By working against the laws of nature rather than with them, humanity heads toward the possibility of erasing life on Earth. The message of the Lemurians is that we can do it differently this time. The shift starts from within ourselves. As we move through our own trauma, triggers and power struggles, we create space for light and life force. We can build on our true inner-sent power and embrace the possibility of bridging heaven and earth.

From this vibration, we have a starting point. By holding the vision, not only can we bring Mama Earth and her civilisations back into balance, but we will create the Eden-like paradise this incredible blue planet can be. 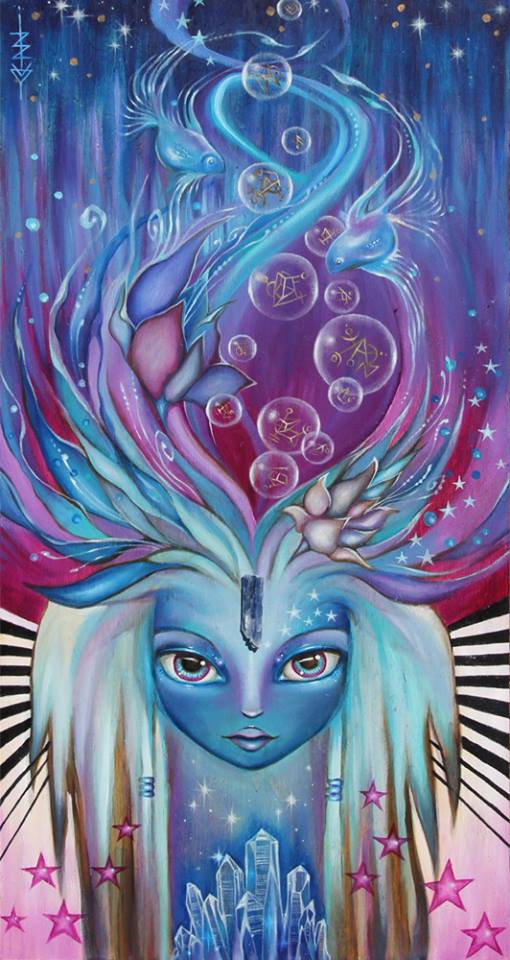 My journey with Lemuria

There seems to be many ideas about what Lemuria was. I have always had a deep connection with this magical place and have received downloads, visions and memories of an incarnation in Lemuria. Thus, I feel I have witnessed their way or life, their environments and how they relate to the world.

When I started to expand my understanding of Lemurians, there was not a lot of information written about them. I delighted in the resonance I felt when I met others who shared similar encounters, as there was usually a significant thread of confirmation.

Embracing my life purpose as a healer and painter was directly connected to the realms of Lemuria. The images that unfurl on my canvas have been a beacon for folk who are also imbued with this remembering. As my connections expanded, I felt encouraged to ground my awareness further and was called to travel to significant vortices around the world where I could further explore the whisperings from this ancient future.

The messages of Lemuria and its residents have been the core of my life’s work.

Piece by piece, image by image, with personal learnings, growth and transmutation, a foundational way of living has unfolded. I feel honoured to have created a container for this wisdom and now share this universe with you in the form of an oracle deck.

Who were the Lemurians?

Lemurians were highly evolved beings with great telepathic ability. They had access to limitless life-force energy and could manifest and heal almost anything. They were multidimensional beings and could move between worlds or overlaying dimensions at will, including backwards and forward in time. To them, all time was happening simultaneously, and they had direct access to the Akash, a living library where everything that ever was and ever would be could be accessed.

Lemurians were familiar with portals and traversed dimensions to gain information and share wisdom. They were deeply connected with other planets, aware of the balance and interconnectedness of all the activity that happens in the Macro-Micro Universe. Often inhabiting the abyss in the spaces between perceivable matter, their particles and physical densities could transform as they chose. The way in which they could move through time and space means they also have access to this very moment and their wisdom is gifted to us as we raise our vibrations to meet theirs.

As they could create anything at will, scarcity was not a factor in their reality. The natural land they lived in flourished and they didn’t need to grasp or hold onto anything. Having immediate access to whatever they desired meant the need to own anything did not develop. They lived close to the incredible land and spent much of their time recharging their energetic resources by immersing themselves in the blissful emanations of nature.

They appeared tribal and were scantily clad as their body temperature was perfectly attuned to that of their environment and there was no shame in nudity. Talismans adorned their body, as beautiful art was a way of containing significant information. They were shapeshifters and could disappear and reappear as they chose or as they moved through different dimensions. They held a deep connection and familiarity with crystals and worked with vibration to bridge spiritual and physical realms.

The Lemurians’ main form was humanoid. They were tall with long limbs and transparent skin that had an iridescent shimmer. Depending on their evolution, they were strong, agile and often androgynous looking. Some had ‘hair’ that looked like dreadlocks but was made of the same iridescent-white, semitransparent matter as their bodies. They were gentle beings who lived in their hearts and intuition was their guidance system for every moment of their life. You could see the depth of the universe in their large eyes and they could raise the vibration of whatever environment they were in.

They didn’t need to eat as they could bring energy directly into their bodies. The arts, dance, music, ceremony and metaphorical expression were keys to their everyday life. Community was vital and sharing the upbringing of children and having loving connections with several partners was not unusual.

They had close connections with mythical beings as the dimensions these beings resided in were similar. They were both of the earth and the etheric realm. They could fly but they didn’t need wings so unless it was for adornment, they preferred minimal appendages for a greater sense of lightness and freedom.

They had a deep connection with animals, plants, the weather and the elements. They are beings we can invite in, to balance Earth and our solar system. They were deeply connected to their ancestors, which were of star origin and shared traits and information with various star beings.

How did it end?

There are different accounts of what caused the demise of Lemuria and Atlantis, but I have learned that my visions of the land tearing up with cataclysmic earthquakes and tidal waves are not uncommon. Some say it was an energetic form of nuclear warfare, others that Atlantis was pushing their experiments of harnessing power to extremes. Their strong intent for accelerated evolution may have propelled both races into the higher dimensions. There are many opinions … depending (perhaps) on whose perspective it is taken from.

I had a vision of Earth with two moons where the Atlanteans tried to harness energy from one, similar to how they worked with huge crystals and pyramids. But it was too powerful and shifted the magnetic core of the earth, the poles and the gravitational field.

On receiving the ominous intuition of this event, some of the beings of these lands were able to journey to other places across the globe. Many accounts suggest that the Lemurians travelled to the Americas, Pacific Islands, Australia and New Zealand, seeding the tribal, earth-centred peoples, whilst the Atlanteans travelled to Egypt, Greece, Central America and India seeding their monolithic cultures.

Although this happened many thousands of years ago, in another epoch, Lemuria is still alive in some of the high-vibrational vortices on the planet. It is said that Hawaii is one of the last remaining parts of Lemuria. This is not hard to imagine due to the incredible degree of life-force energy present in nature there. Mount Shasta, in California, is also deeply connected to Lemuria. It is said that many of the remaining Lemurians live under this huge mountain in a fifth dimensional paradise called Telos.

The teachings of the Lemurians are alive in the whisperings of ancient natural places. Those that live closely with the land, continue to dance and sing their mysteries, through plant medicines and when we are able to lift our vibration through meditation, dance and whatever brings us in to the presence of our hearts.

When we can shift the beliefs and the stories that keep us small, we can move in to our true purpose and freedom. When we follow our bliss and our heart of hearts and realise every little thing we do does make a difference, we can be the change — individually collectively and in the macro-micro scale beyond space and time. 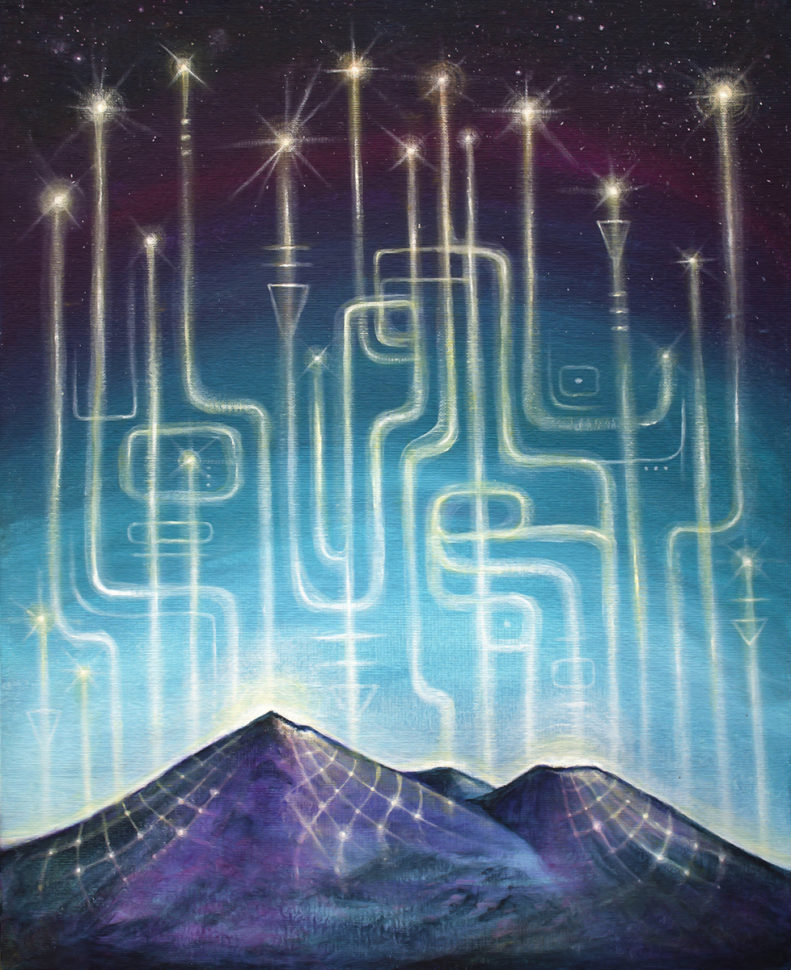